CAZCARRA WITH THE FILM INDUSTRY 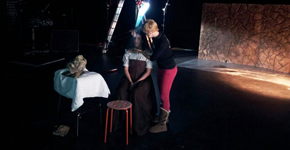 Cazcarra Image Group is working in the 4thedition of Gaudíawards that puts the Catalan Film Academy. The makeup schoolCazcarra professionals have a responsibility to achieve the makeup of the actors who participate in videos to be broadcasted at the Gala on the next February 6th. There, is paid a tribute to the Catalan production of films that are competing, a total of 29 belonging to 22 categories. Among the films nominated are "Eva", Kike Maíllo, "MientrasDuermes", JaumeBalagueró, and "Bruc, The llegenda" Daniel Benmayor.

Gaudí Awards are the most prestigious awards of the Catalan film industry, currently experiencing one of its best moments. In them, he acknowledges the work of artists, directors and crew that promote Catalan art in the world.

On Monday, Feb. 6th gala attendees will enjoy the videos and experts who helped Cazcarra Makeup Academy. Do not miss the live broadcast of the Gala , TV3, the catalan regional television will broadcast.

This website uses cookies to improve your experience while you navigate through the website. Out of these cookies, the cookies that are categorized as necessary are stored on your browser as they are essential for the working of basic functionalities of the website. We also use third-party cookies that help us analyze and understand how you use this website. These cookies will be stored in your browser only with your consent. You also have the option to opt-out of these cookies. But opting out of some of these cookies may have an effect on your browsing experience.
Necessary Siempre activado
Necessary cookies are absolutely essential for the website to function properly. This category only includes cookies that ensures basic functionalities and security features of the website. These cookies do not store any personal information.
Non-necessary
Any cookies that may not be particularly necessary for the website to function and is used specifically to collect user personal data via analytics, ads, other embedded contents are termed as non-necessary cookies. It is mandatory to procure user consent prior to running these cookies on your website.
GUARDAR Y ACEPTAR